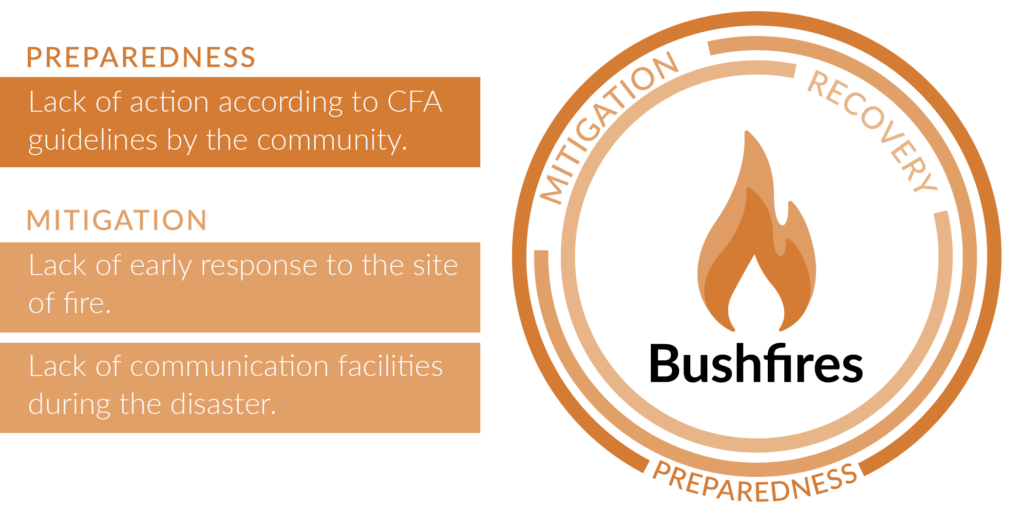 We have been working on reconstructing the ideas and building prototypes, considering the insights collected from our potential stakeholders and the gaps identified. The three areas that we focused our ideas on were, lack of Preparedness amongst the community, inability in providing early response to the site of disaster, and communication issues during the disaster. Our three main interventions for the three gaps were Helios-Fire-fighting aid for Country Fire Authority, SATCOM- Network Mesh System for Communication, and structuring a survival kit-Pyro Kit for communities. 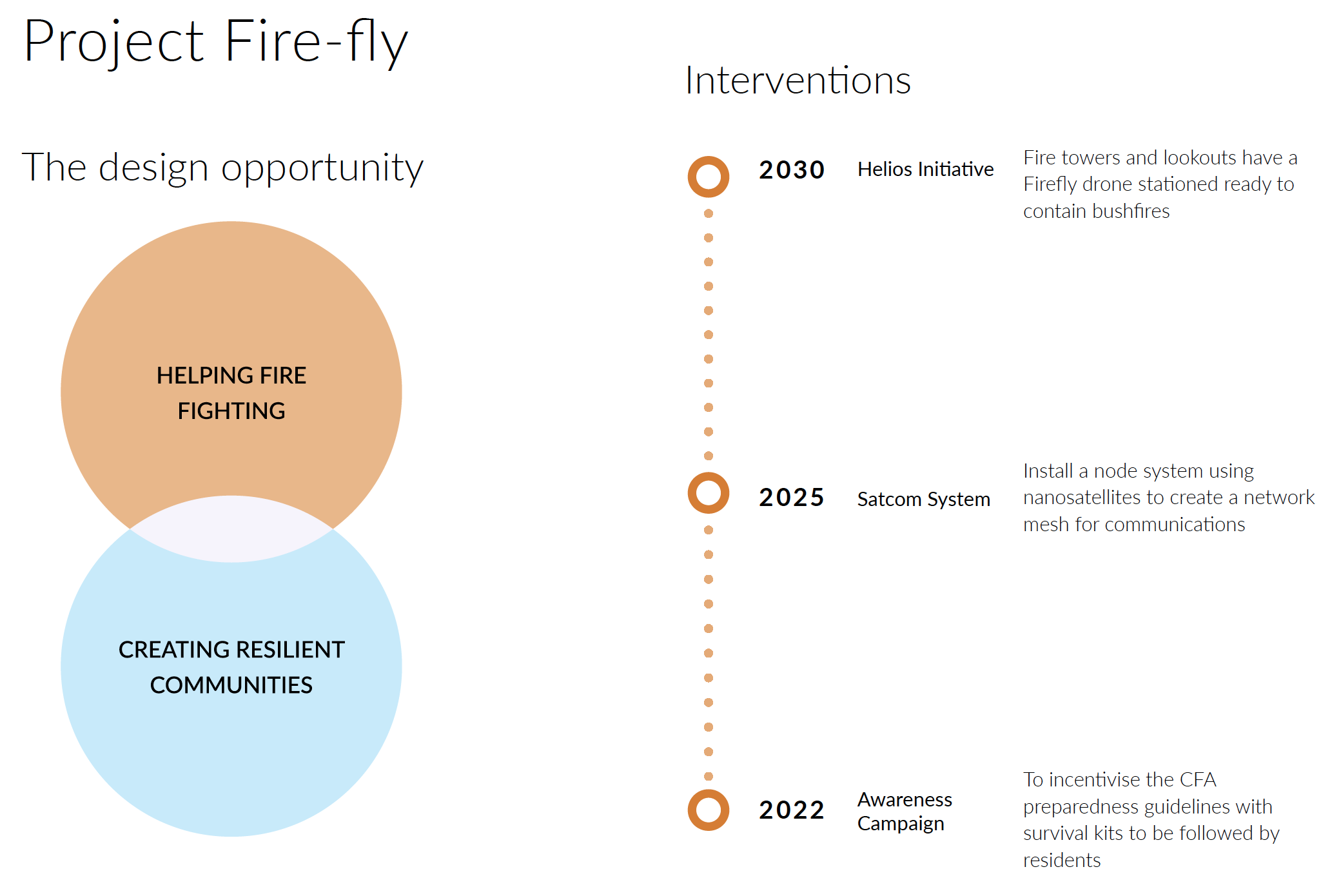 The structure of Helios 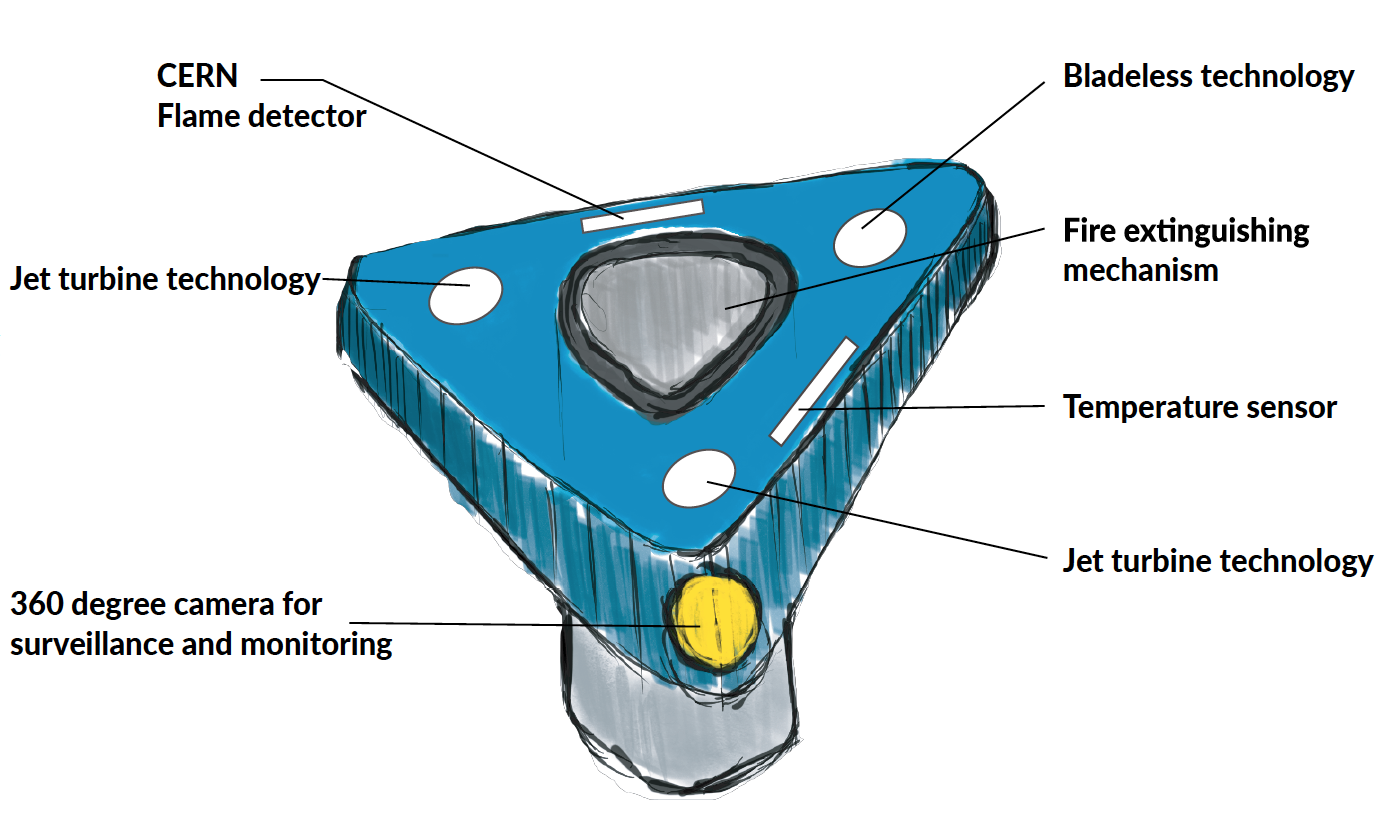 Helios is a UAV that is designed to be the first line of response for firefighting. The two main functions of Helios are early detection and extinguishing of bushfires. Using the” UV Flame detector” CERN technology, it can detect the slightest of the flames up to 20kms of radius. These Helios units will be mounted on the already existing fire towers in Victoria. With its 360-degree camera, it can capture live visuals of the bushfire-affected area. The fire extinguishing system will be placed in the center of the drone. These autonomous drones will run on solar energy. To keep a track of Helios units, fire firefighters will be provided will HMI (Human Machine Interface) unit which will be installed in fire towers and local fire stations. The HMI unit will show the exact location of Helios. After tapping on the drones, one can see the live footage of the fires that it is fighting. Helios provides early detection of fires with aerial support. It reduces the area of impact by containing bushfires. It saves the environment and human lives by extinguishing fires at an early stage. Helios enhances mitigation before, during, and after the disaster.

The future scenario for Helios

With reference to our timeline, the idea is to improve the existing campaigns regarding Bushfire Safety and create awareness amongst communities. Here we have worked around incentivizing the whole criteria of Safety by creating a survival or as we named it – “Pyro-Kits”. This kit consists of essential items like a Fire-proof suit, Fire extinguishers, Gas masks, and a bunch of basic medicines. 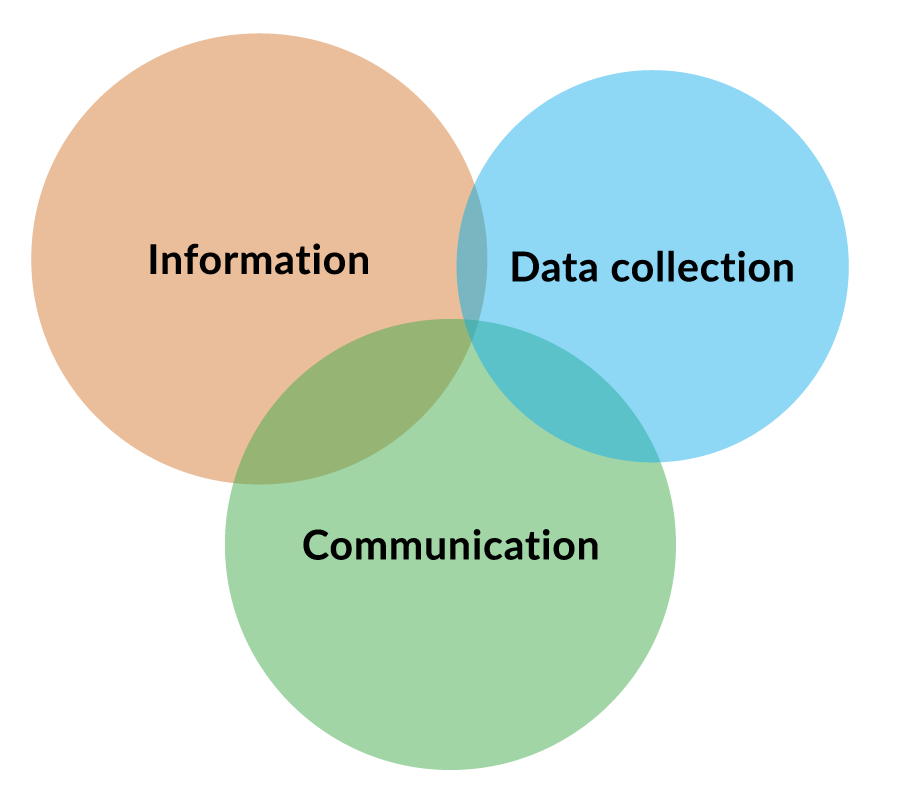 This system addresses the issue of Communication as network towers, or the coverage gets affected due to hindrance caused during the disaster. The concept of the Nodal system is independent of the existing network system and further, we looked into incorporating Nanosatellites to build a stronger network mesh. The main aim of this idea is to collect, retain information, which will be transmitted to existing channels and devices. During disaster, the SATCOM mesh activates as these nodes receive the signals from Nanosatellites. Further, these nodes would activate a dedicated channel across all the devices and broadcast media, informing communities to evacuate on time. This system shall be installed on existing infrastructure for example, this device can be installed on streetlights without any changes and this system will function using Solar power. 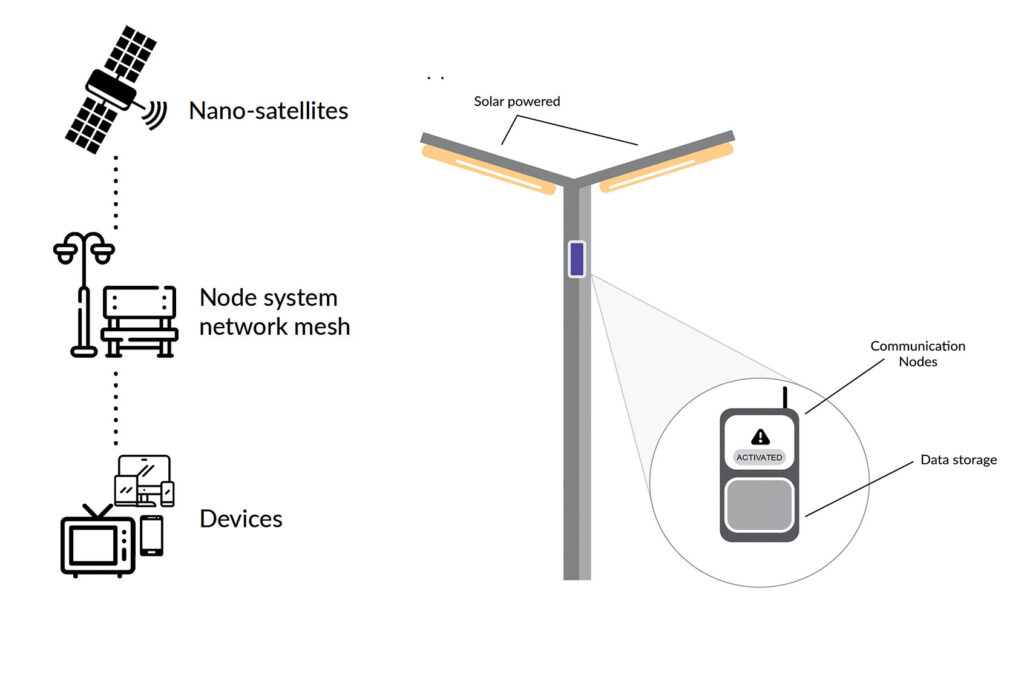 The SATCOM mesh provides value to residents, with a dedicated channel for communication and constant updates. The goal is to aid preparedness through direct updates and help residents follow the protocols provided by authorities. Hence, this communication system would aid in strengthening the community, creating resilient, strong, and secure communities from Bushfires, by the year 2030.

Our next steps include taking on board the feedback that we received on our presentation. Considering some of the factors like extinguishing system, external form, size, weight, and material for the Helios. For the communication system, considerations like material, insulation, and weight of the node system.

Quote of the week

“By 2030, our vision is to forge resilient, sustainable, and secure communities from Bushfires.”
– Earthlings