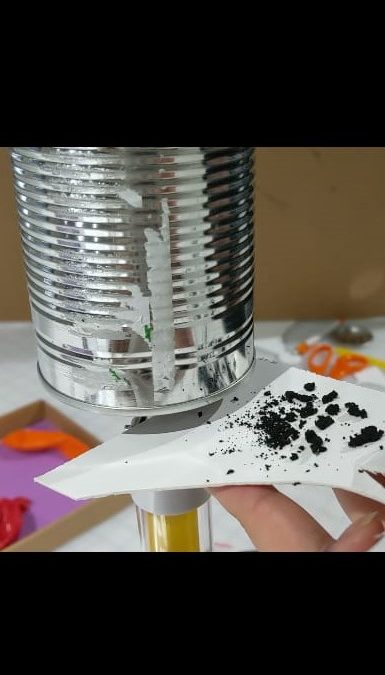 This week our coach and friend – Paris suggested that we map out the stakeholders, the users, existing ideas, connections, basically everything we had – on a long scroll of paper. We started from the basics, looking at the SDGs Goal 6 and 14 and branching out to the sources of microplastic, our focus of tyre dust and city dust, possibilities, and gaps.

We finally received our static charge kit and built our own Van De Graaf generator. From our previous ReTyre and AutoSort concept, we identified that electrostatic would work to attract tyre dust. However, due to the danger of implementing it on cars (sparks might ignite fuel vapours), we thought it could instead be utilised in existing Melbourne infrastructure such as trams because they are already powered by electricity at around 600V-750V. Hence, a very Melbourne-focused idea. We think of it as the simple principle of the aluminium can from the Van der Graaf generator.

From what we observed, the tyre dust (negative charge) is attracted to the ring (positive charged), and it is drawn inside, not on the outside. Thus we were thinking of changing our initial ReTyre concept of a plate to a ring-like structure underneath the tram. We spent some time visualising and deciding on the form and functions.

It was also inspired by the form of CERN’s Large Hadron Collider (LHC) and the Australian Synchrotron. Instead of straight lines, it could be curved and fit for its purpose on tram class E as we envision for the next few years, the Melbourne urban area will utilise new trams.

We also sat down for another team discussion, openly discussing our ideas, thoughts and feelings. This time, it was a team dynamics reflection without structure.

From the Van der Graaf experiment, we understand that the aluminium can we used was not made of pure aluminium. There is a different mixture of metals. Hence, the tyre dust is attracted to the inner ring (which is the metal) not the outer material which is the aluminium. This experiment has also identified more gaps in the recycling industry and how much higher level material sorting is needed in the case of composite materials.

We learnt that it is okay to take some time to talk about how we feel, what we think and be patient. People might not be able to see or understand what ones are trying to convey, but through time, it will be more explicit. It is essential for us to respect each individual’s point of view.