Following the end of our 4 weeks of Exploration festival, we had three unique problem spaces that are necessary to be addressed and resolved for the year 2030. The three problem spaces that we came across were –first, to create renewable sources for public transport. Second, to create an automated maintenance system for edible plants that enables access to organic and home-grown food for our future generation, and third, to work on creating an immediate response to Bushfires in Victorian suburbs. The most critical and common factor that these three problem spaces shared was rapid population growth. According to the Australian Bureau of Statistics, Victoria is going to experience an incline in population, up to 8.4 million by 2030. Eventually, this urban sprawl would lead to an increased amount of carbon emission, resulting in adverse climate change. 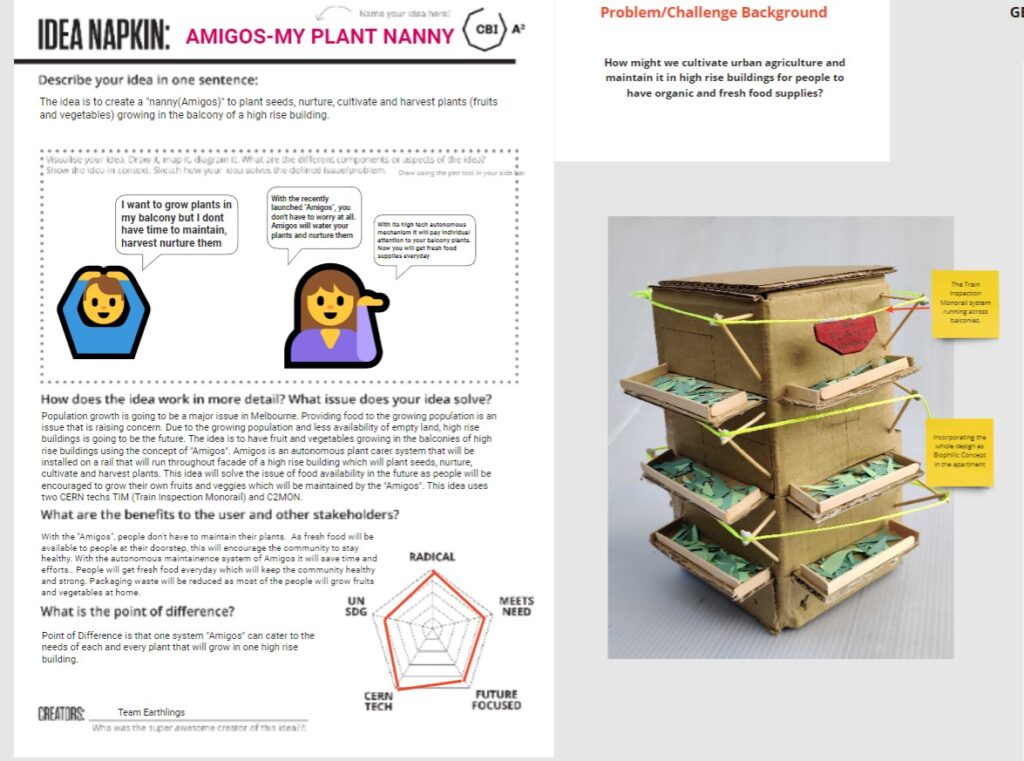 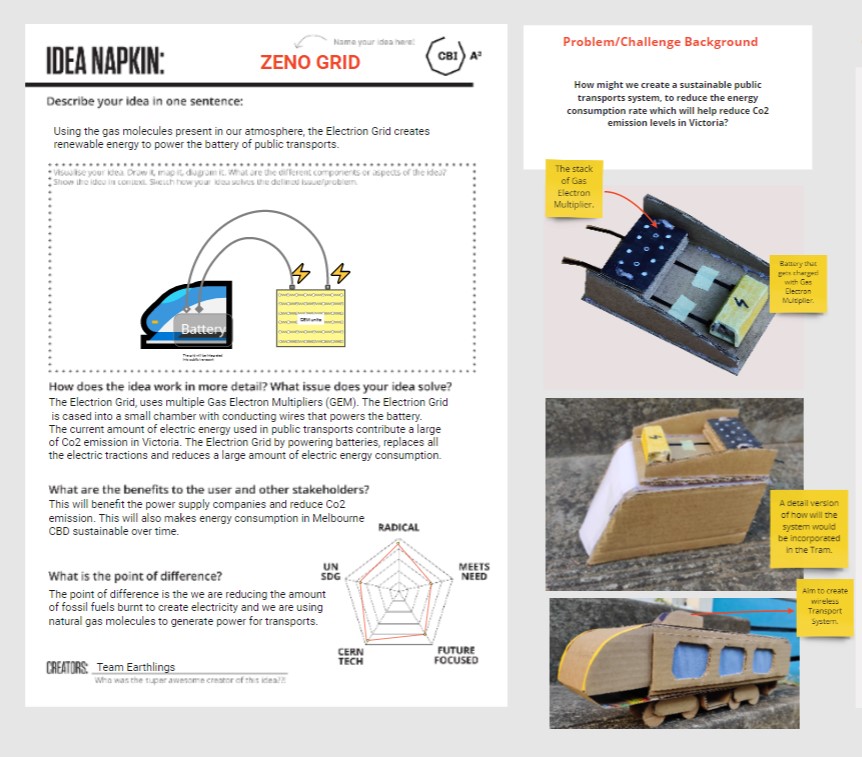 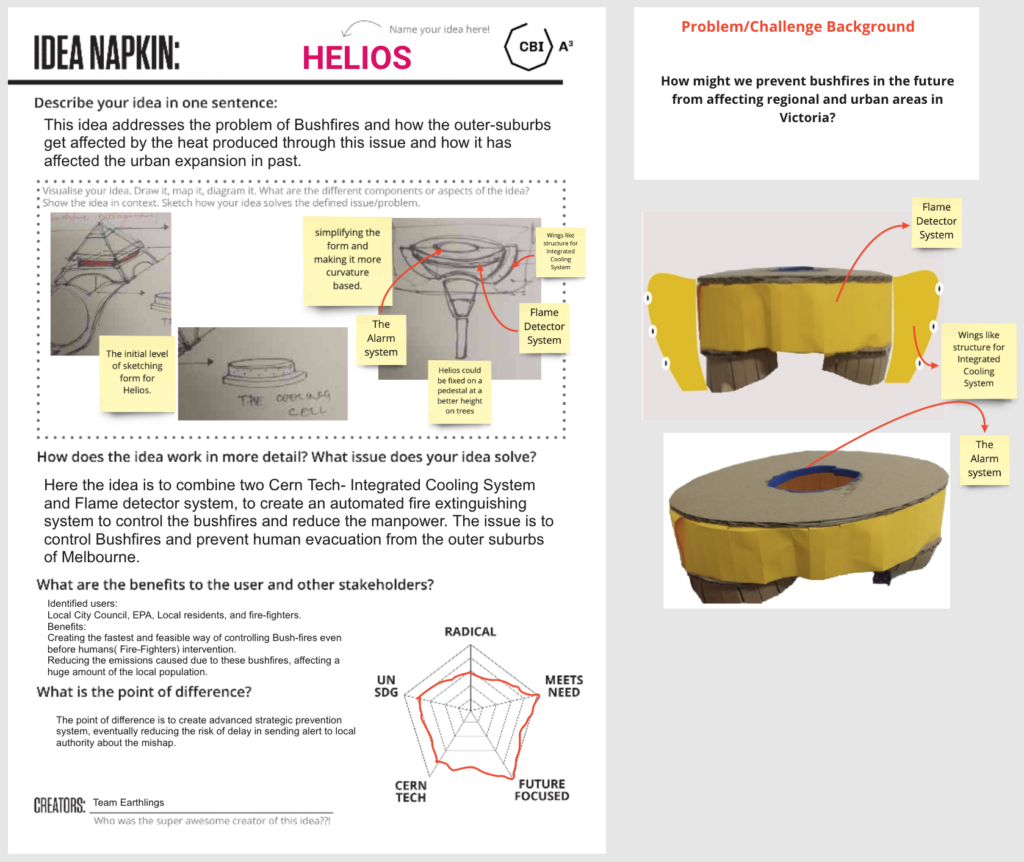 Considering the feedbacks that we had received from CERN experts and our Global Network teaching team, we concluded to pitch two out of three concepts for our final Phase-1 presentation. The first idea was for creating an automated maintenance system enabling plant cultivation called “Amigos” which is installed in high rise buildings. This will aid with providing access to organic food supplies to the community and residents. The second idea was to create an immediate response with drone systems to help bushfires, named as “Helios”.

Both ideas were found to be interesting and provided a great amount of information to our teaching team and experts from the CERN Ideasquare community. However, during a detailed meeting with the experts from CERN, we had an opportunity to scrutinize these ideas holistically. During this meeting, we gained a good understanding of which one of these ideas would be feasible and beneficial for the year 2030. Hence, we had more questions to resolve and more details to consider in order to add to the design, using CERN technologies. For example, identifying the core features of the concept and how these existing technologies would grow in the next 10 years.

Considering all the feedbacks that we had received in our PHASE-1 Presentation and meeting with CERN experts, we decided to proceed with the idea of “Helios”. The problem space of Bushfires has more scope in terms of development and feasibility. Therefore, we continued our research and came across various technologies including UAV (Unmanned Aerial Vehicles) systems, thermal sensors, and how these technologies have been used in different areas across the globe.

Wildfires raging through the forest

Considering the rise in the Victorian population and the current amount of carbon emissions which would eventually increase, it has been predicted that Bushfires would become more prevalent in the future. These bushfires would be drastic due to dry summers caused by these extreme weather patterns. We learned that the Australian Bushfires were constant in the past but currently is desolating more forests and Australian wildlife. In the speculated future, there are going to be more built communities, which will exist closer to dense forest and rural areas, which are prone to bushfires. The rapid urbanization may leave us directly exposed to this natural disaster and with more successful defense systems, it will be harder to tackle in 2030.

“The worst enemy to creativity is Self-Doubt.”

We are currently breaking down the elements of our problem space and relating it with our initial design idea for further iteration. There are several points and facts to be considered in order to execute the idea for 2030. Hence, our next steps include rapid prototyping and may consist of altering our choice technology to develop the “Helios” system.