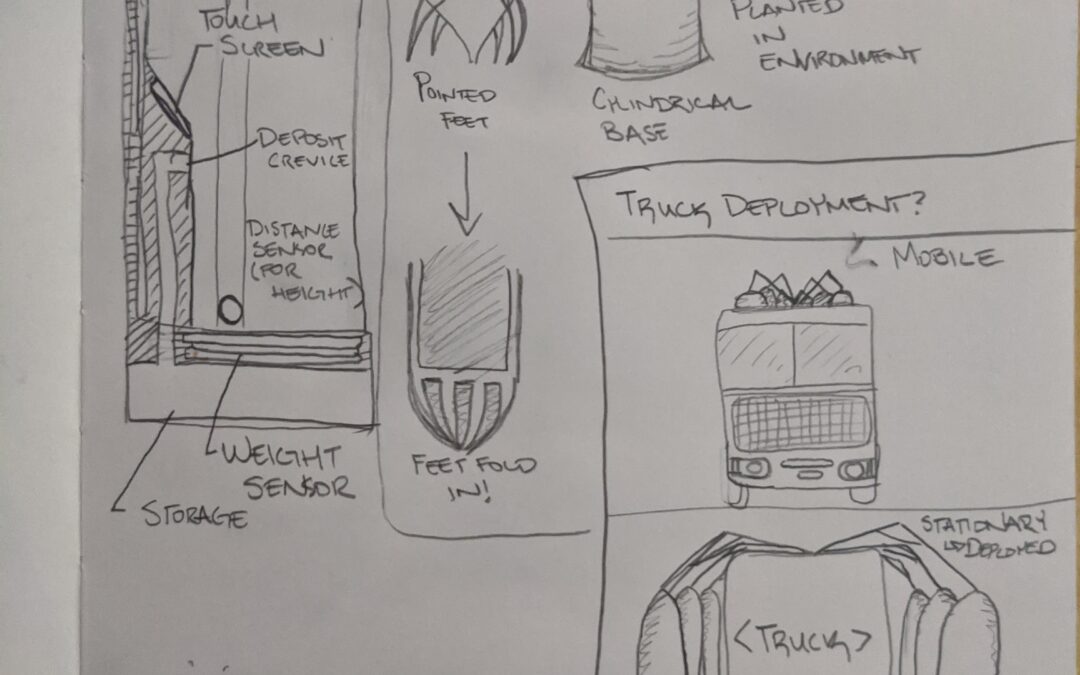 With due dates set and deliverables established, Team METRO has been hard at work producing the first drafts of the deliverables addressed in the last post. 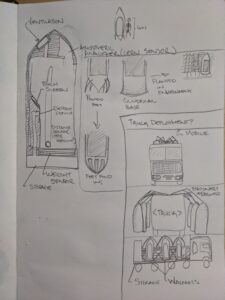 As it is already visible, the first thing of note is the sketch provided as the featured image for today’s Swipe. The drawing (pictured right for better viewing) provides an early draft for what the concept is, and has provided a good pivoting point for working out specifically where each of the desired components will be placed, how they will interact with each other, etc. The team hopes to have more sketched designs created before making a finalized 3D model, and so much of the meeting was discussing the interplay of components put forth in this early conception. From here, METRO is aiming for a more detailed and refined sketch by the end of next week.

The other deliverables discussed were the roadmaps, specifically: the summary visualization, which provides an in-depth look into the visual design of the solution, the resources utilized, the people involved, and the future scenario wants that warrants the product; the timeline roadmap, which details our future vision, the change in the socio-economic landscape over time, our problem space, our deliverable, and the ‘how’ of our resource implementation; finally, the stakeholder roadmap, which charts out a length of contributors to the project, along with their respective contributions, motivations, enablers, and means of engagement. Much of the feedback provided on these suggestions was a need to elaborate. The consensus was that they were good starts, needing improvement but showing strong promise nonetheless.

Once a review of these deliverables was completed, METRO returned to some course materials to ensure they were not forgetting anything that might prove useful in the developmental stage. The material focused on system-level architecture, the design process of which is as follows:

Step 1 — Identify System Elements, which include…
a) Functional Elements
b) Physical Elements
Step 2 — Cluster elements into chunks
a) This clustering can be done on the basis of functionality or physicality.
Step 3 — Create a rough geometric layout
a) This is to finally take the elements that were identified and stratified previously and to place them within a whole system.
Step 4 — Identify Interactions, which includes…
a) Fundamental (intended) interactions
b) Incidental interactions 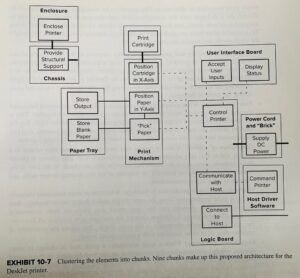 Displayed left is an example of systems-level architecture design for a printer.

Overall, the process holds immense value for METRO. It is likely that there will be many obstacles to overcome during the process of developing such a design, but those obstacles are necessary for developing a product that holds solidarity in functional design.

After this, METRO  reviewed the needs typical to any user during their experience of a product, which poses a series of questions: How important is usability or ease of maintenance? How complex are the interactions for the product functions? How familiar is the user with the interactions? What are the safety concerns of the design?

Finally, METRO reviewed possible aesthetic needs to keep in mind, such as brand-recognition or evoking pride-of-ownership.

With this information in mind and their work still set out ahead of them, METRO departed from the station to continue their work on the final deliverables. With only a few weeks remaining, the team is keen on providing a well-documented product that is desirable for users.

The next stop is Deliverable Refinement.