This week, we began working on future scenarios with a mentor of ours, Bridgette Engeller, being introduced to a “Harman Fan” scenario building tool that allowed us to envision ‘infinite futures’ and when they would come about. Alongside building a futures wheel (based on the consequences of our topic), these tools gave us interesting insights into the uncertainty around what the future holds, making it extremely important to understand that the future is fluid and as predictable as it is unpredictable. 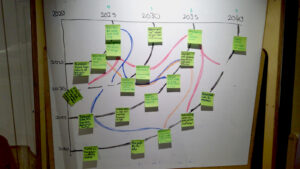 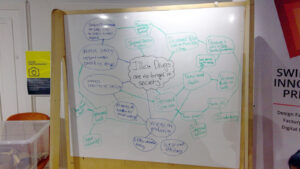 Team ASE also began discussing our concept a bit further, attempting to step away from technology (just for a second) and focus on the user and what their experiences would be like. We were encouraged to develop a prototype that we could test with, something we feel would be extremely beneficial by moving away from purely desktop/secondary research. Team ASE continued to work on the PESTLE Canvas, collaborating on envisioning Australian society in 2030 in order to allow our design to ‘fit in’ and create a vision statement (which hasn’t been finalised as yet).

“Stop focusing on tech so much!”

In the next week or two, we aim to finalise our PESTLE canvas, ensuring we have a vision statement and possibly even a visualisation of our future scenario prepared, as well as build and test at least one prototype in order to gain greater insight into our problem space and expand our collection of primary research. We also aim to speak to the NYC Design Factory’s Team Metro and discuss CBI A3 and exchange knowledge on each other’s projects.